Joe’s siblings are always good sports at dressing up in costume for our Halloween party. 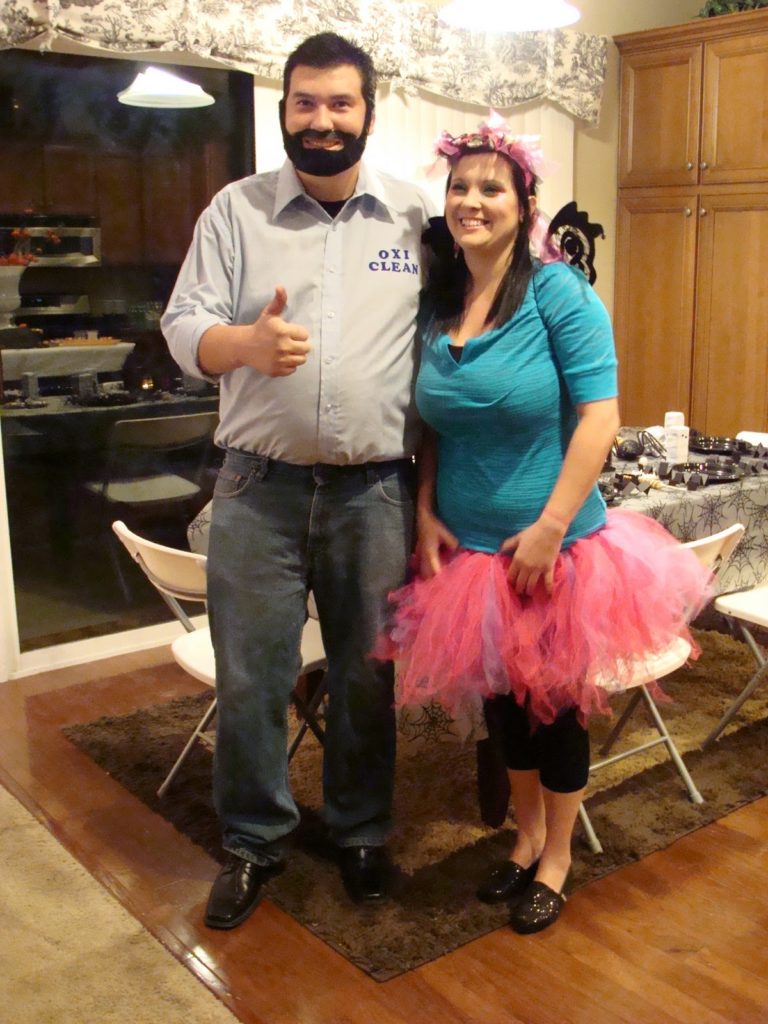 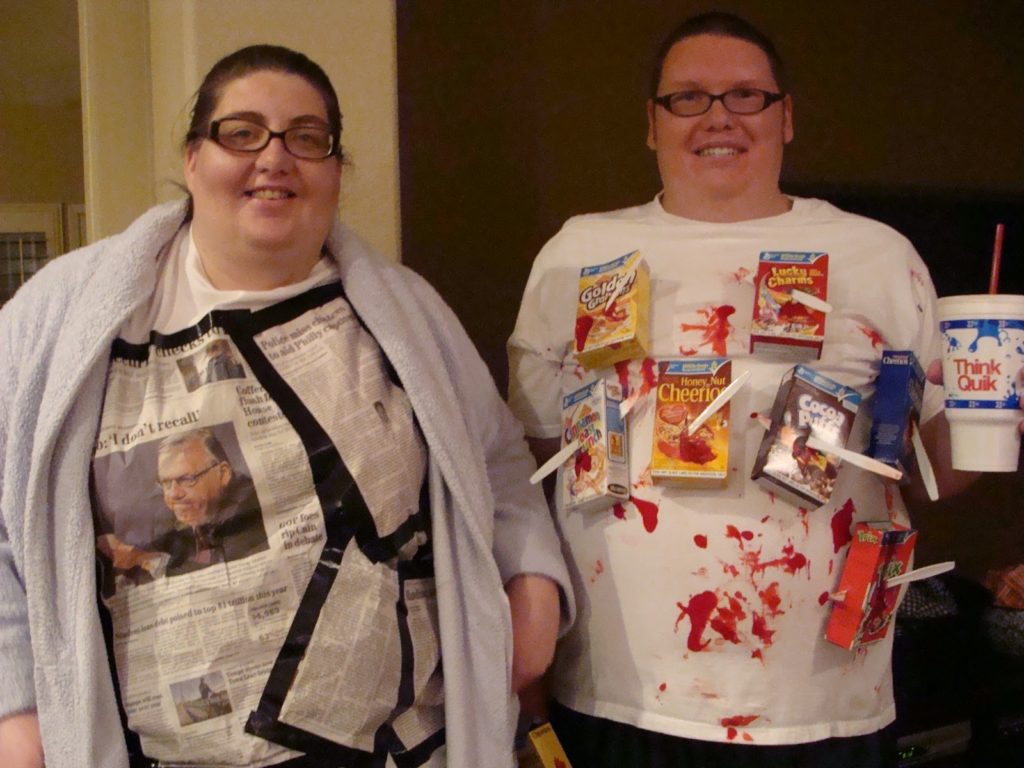 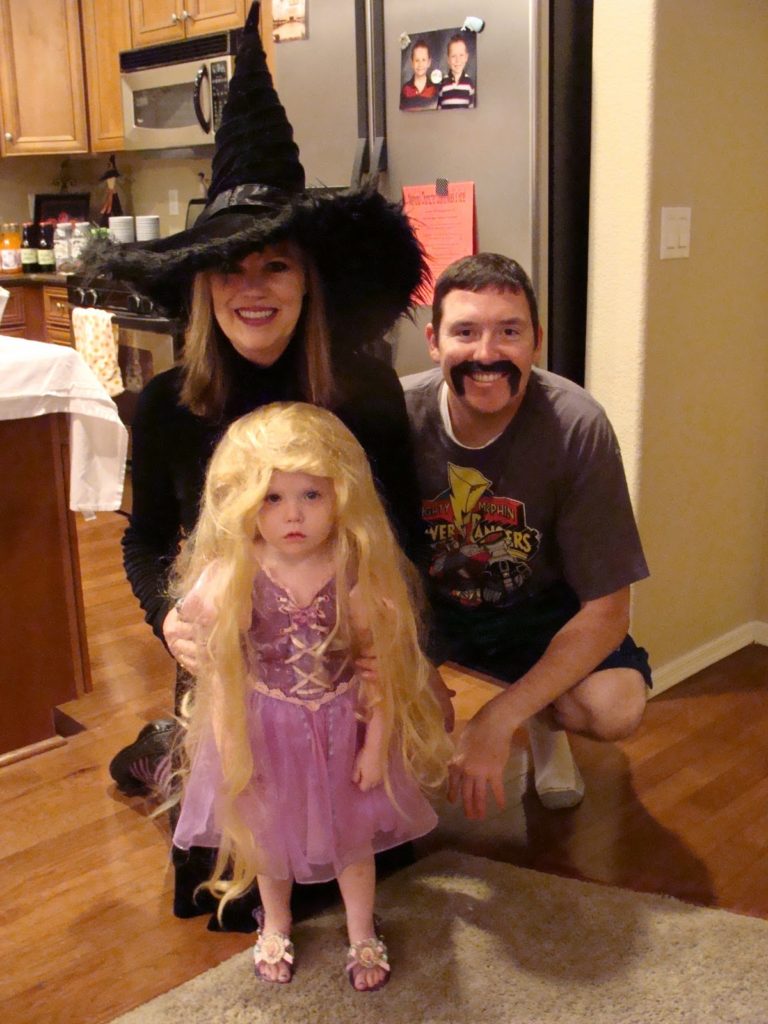 Grandma Marilyn, Joe as ? who knows what?? and Ms. Rapunzel 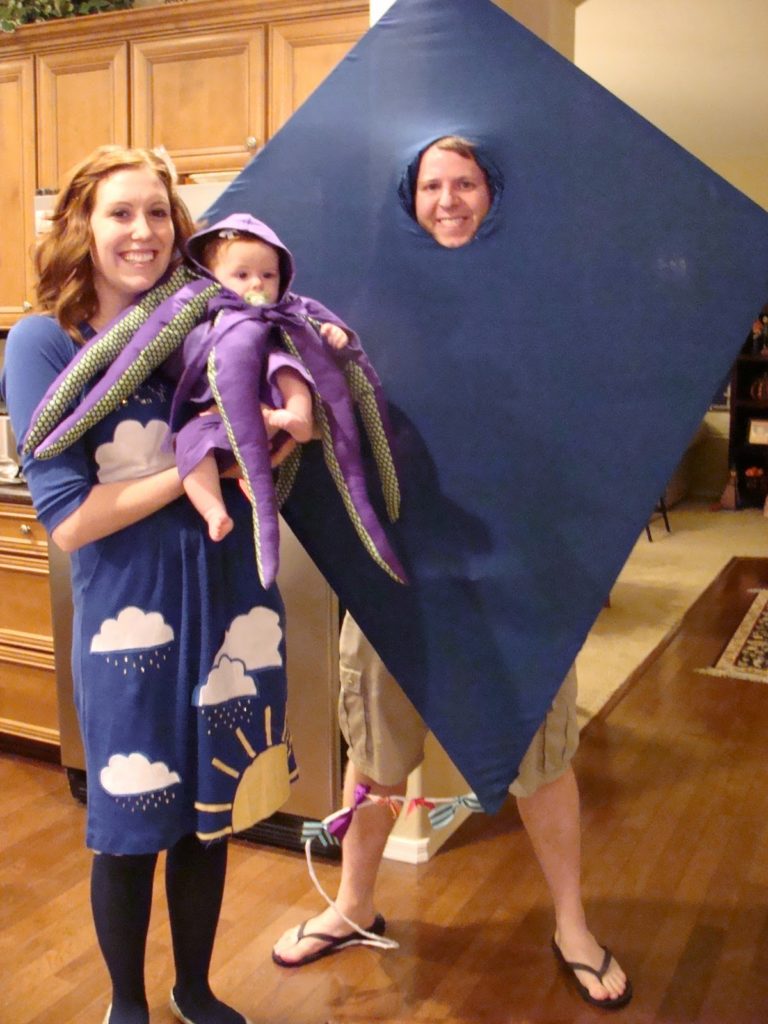 The cute Bradford family.  They all dressed in Beatles song themes. You can read about it HERE.  It is SUPER clever.  Jenny: Lucy in the sky with Diamonds June: Octopus’ Garden Will: Being the Benefit of Mr. Kite
Our Fear Factor game was the highlight of the evening.  There were 6 rounds.  They progressively got harder. And more disgusting.
Round 1: Baby Bottle Burp.  One team member feeds the other team member a baby bottle filled with coke.  Whomever FINISHES the bottle FIRST…and then produces a loud BURP gets 10 points. {This SOUNDS easy…however with a nipple that is only a #1 – it takes forever and is hilarious to watch!}
Round 2: Banana Hose.  Pick one team member to place a pair of panty hose over their head.  The first contestant to eat an entire banana THROUGH the panty hose WINS.  Winner gets 20 points.  Another HILARIOUS event to watch! 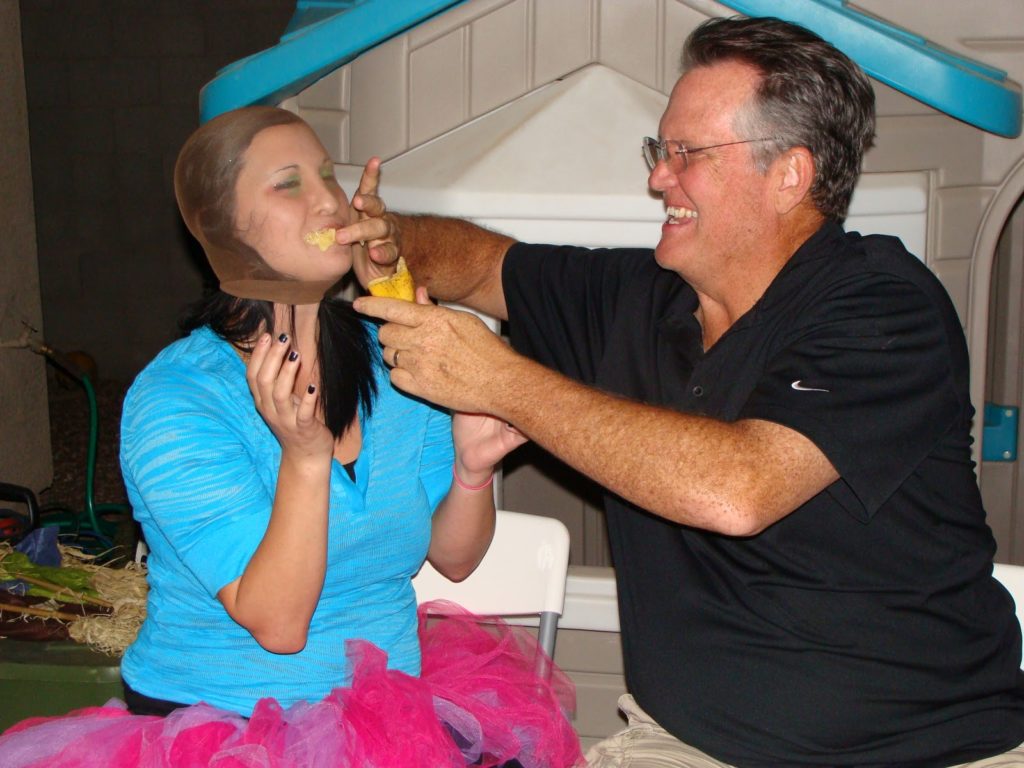 Scott helping feed the banana through the panty hose. 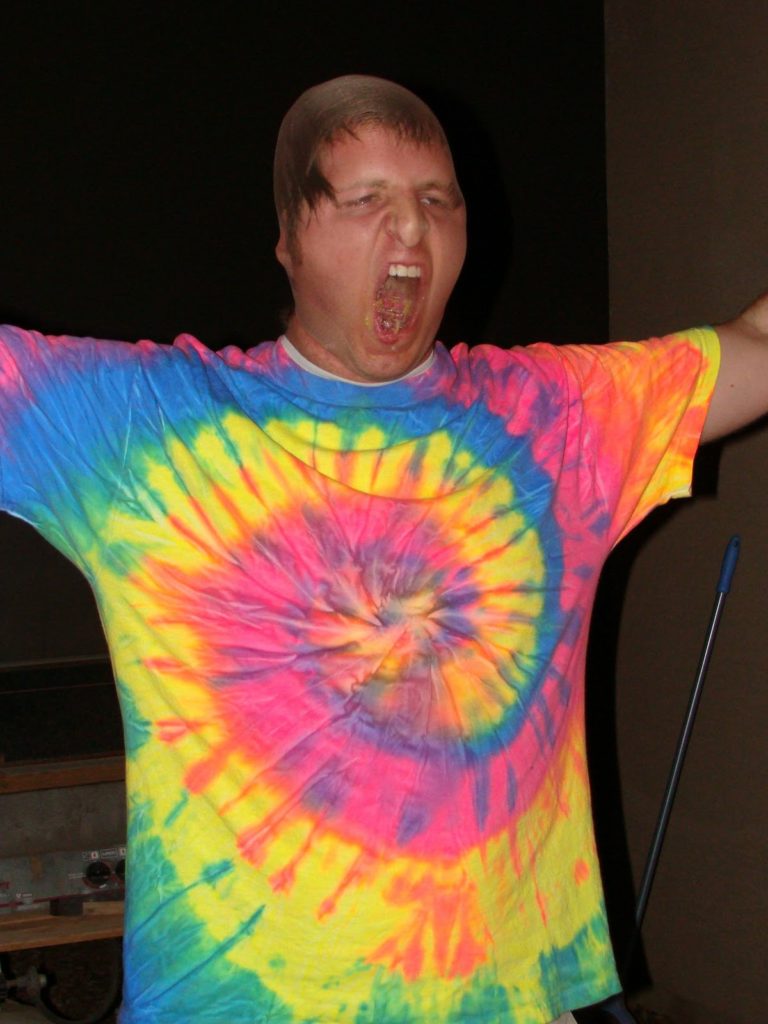 William won.  Thankfully.  He was my partner!
Round 3: Slug Scrabble. Each team must sift through the slugs to spell out words with the Cheeze-itz scrabble crackers.  You have 1 minute to spell as many words as possible.  Words must be more than 2 letters long. The team to spell the MOST words….gets 10 points.
It looked something like this:
Round 4:  Tug-O-Fish. Just like tug-o-war, but a one-on-one competition with a FISH. {Yes…eyeballs and all!} Choose one team member to participate.  This team member will go up against a different team member and play tug-o-fish.  At “Go!” everyone starts tugging. The first person to let go (whose hands slip off) is out or if the fish breaks, the person with the largest half of the fish in their hands gets the points.
Round 5:  Lean Cuisine.   Large bowls were filled with Sardines, Pigs feet, Vienna Sausages and Spam.  The contestant has a designated amount of time to grab a sardine (or whatever you choose to use) in their mouth, run across the yard and drop it into the empty container. They must transfer as many food items as possible in the amount of time given but can only transfer one at a time.  Team with the MOST items in their bowl wins 20 points!  This was SO gross that only Scott and Mary were gut-sy enough to compete.  Mary won.  Woot!
Round 6: Jelly Bellies.  For this round  I purchased a few boxes of those gross ‘Beanboozled’ Jelly Bellies from a local candy store.  Flavors include:  ear wax, skunk spray, baby wipes, booger…just to name a few.  Whichever team could eat THE MOST jelly bellies in 2 minutes…scored 30 points.  It was nasty.
Bonus Round:  Pest Control.  Also at my local candy store, I found boxes of yes…dead meal worms {with a mexican spice}, dead crickets {with a tangy sour cream and onion flavor}and chocolate covered insects.  30 points were awarded for EVERY cricket consumed.  30 points were awarded for every WORM consumed.  And 10 points for EVERY chocolate covered insect.  The worms and crickets looked like this: 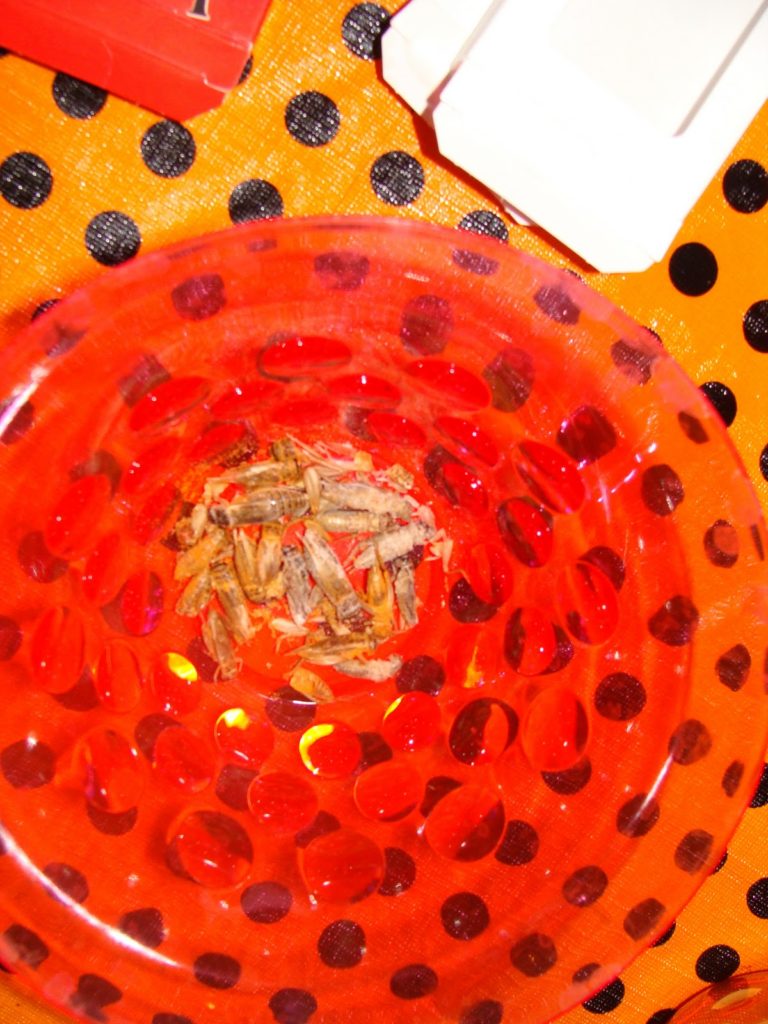 So nasty.
And just in case you’ve cared to read this far….here are the Party favors for my LOVELY family members who were SUCH.GOOD.SPORTS! 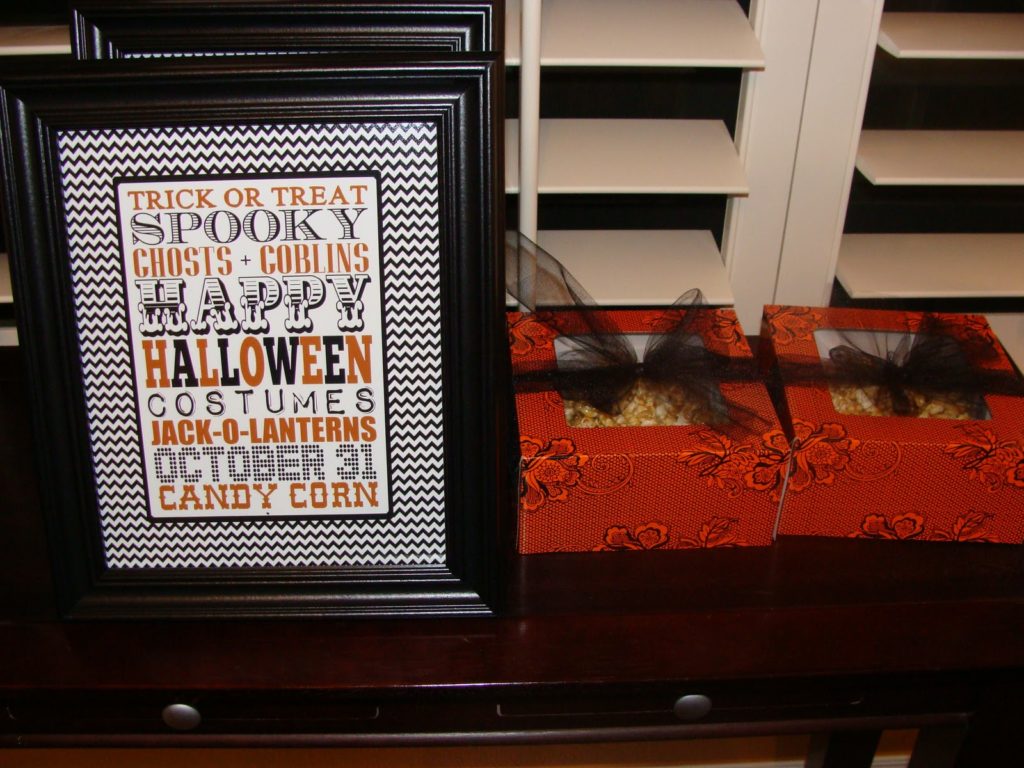 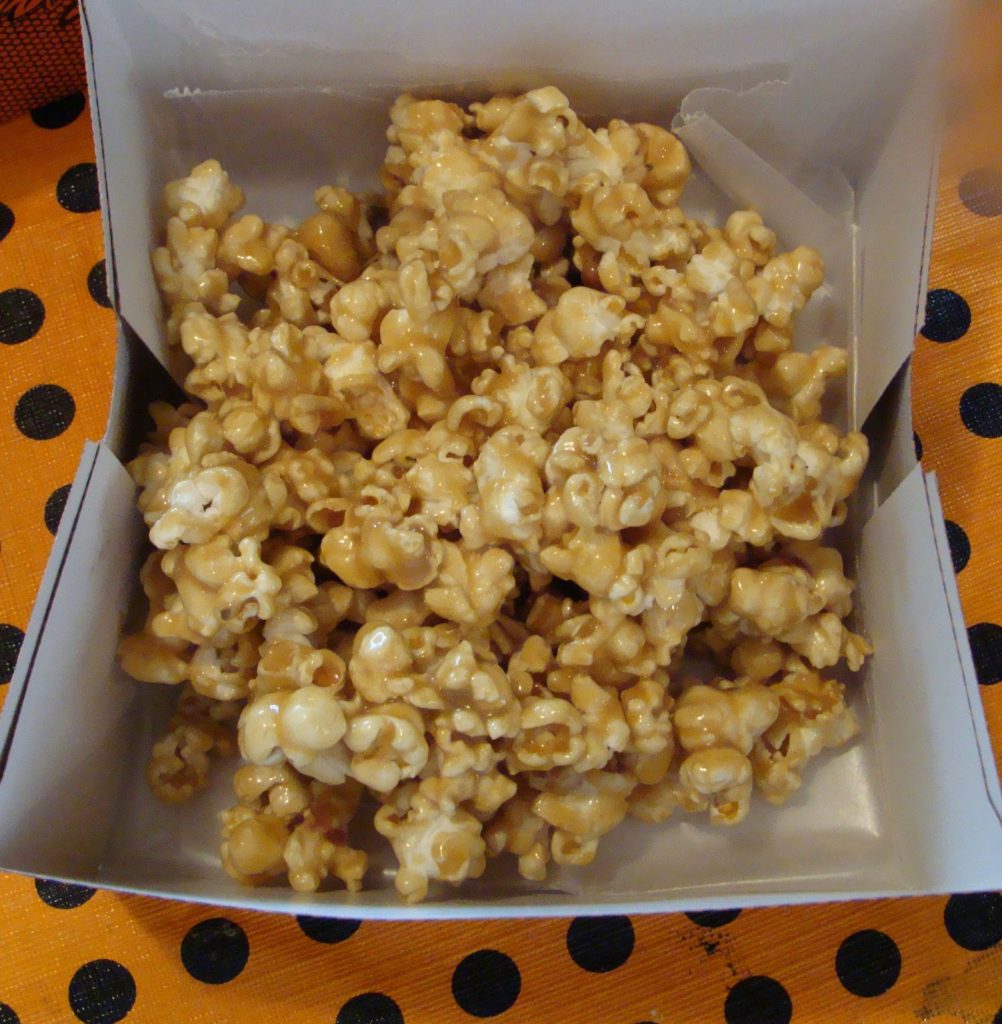 Boxes of homemade Caramel Corn {recipe to be posted soon}.  Boxes were purchased at Michaels.  And subway art was printed off of eighteen25 and framed.