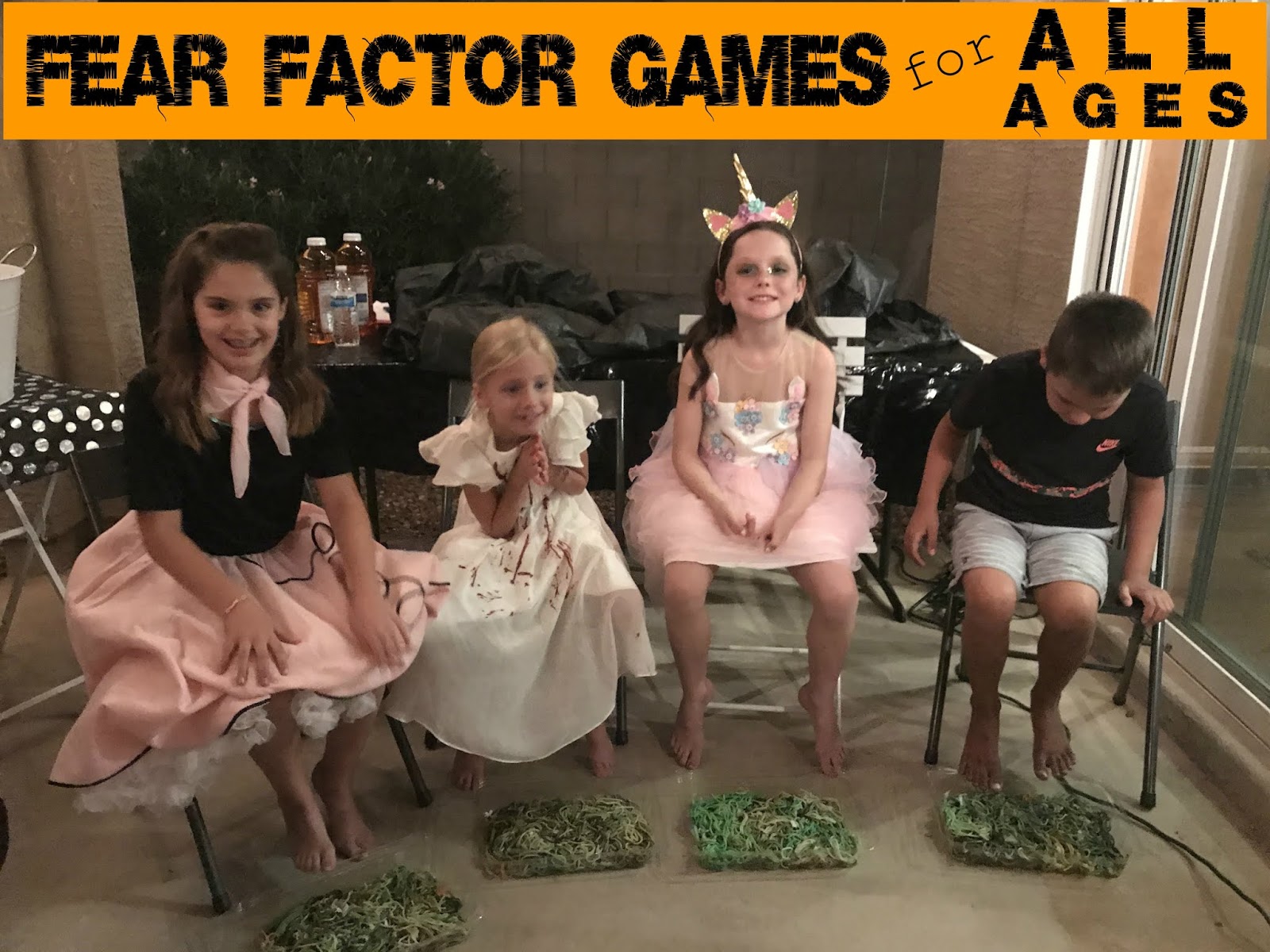 As promised, I’m sharing ALL of the details from our FEAR FACTOR game last weekend at our Halloween Party.

We broke into families and played family vs. family.

Each round got progressively harder//grosser,
so it was good to announce that to the participants so some of the shy, younger kids could be the first to go.

Everyone in the family had to participate in at least 1 round.
There were 8 rounds. 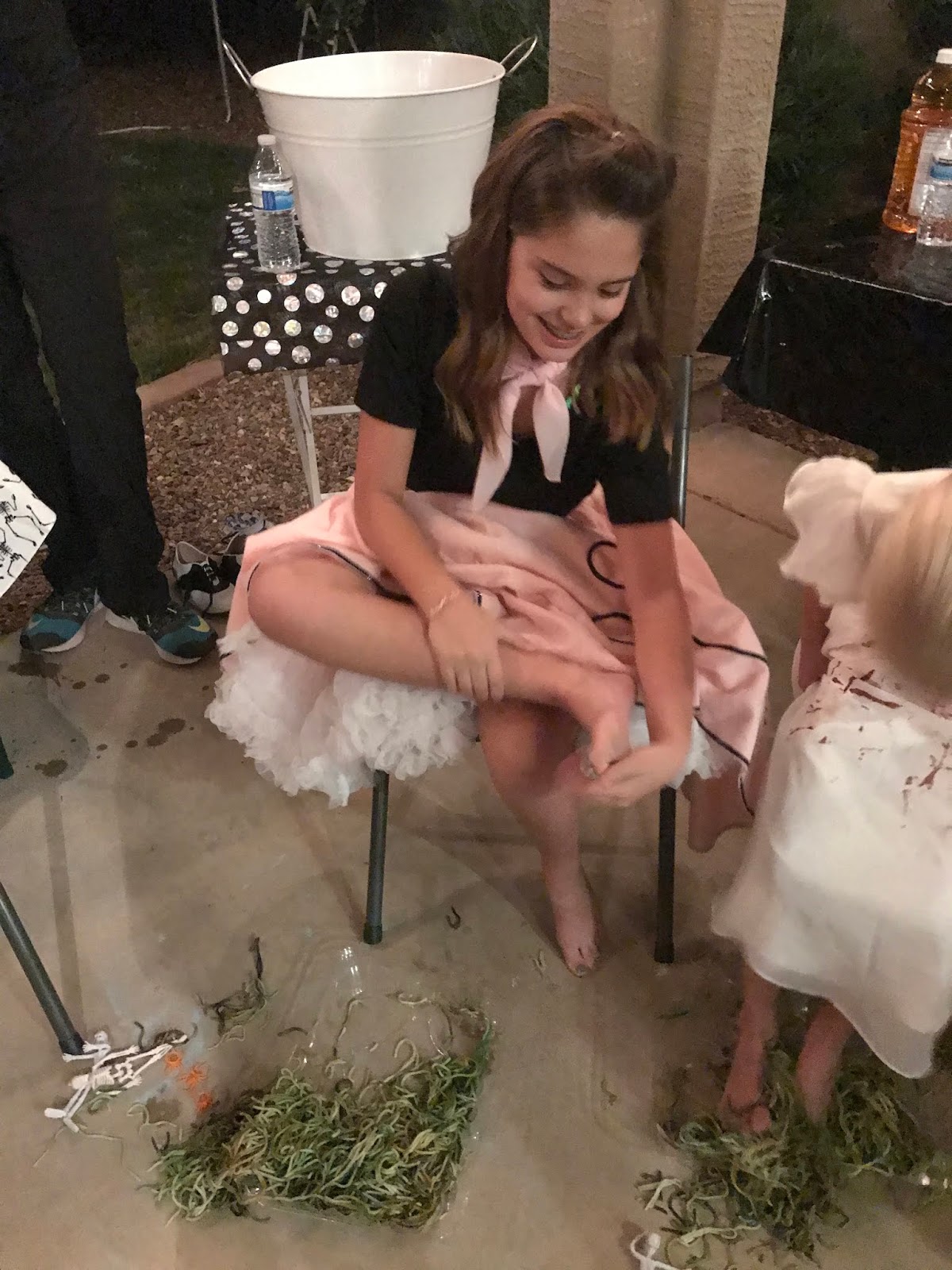 Each team picks one player from their team to participate.

Players sit on a chair and have to pull OUT OF THE ZOMBIE GUTS {cooked spaghetti with food coloring} – 5 different things. {Think…plastic spiders, skeletons, etc.}

The catch was – they had to do it WITH THEIR TOES.
And nothing else.

First person to do this WINS 10 points for their team.

Note: this one was MESSY.  If I were to do it again, I’d place a plastic tablecloth on the ground so that the clean-up wasn’t so hard.  Picture smooshed spaghetti noodles everywhere. 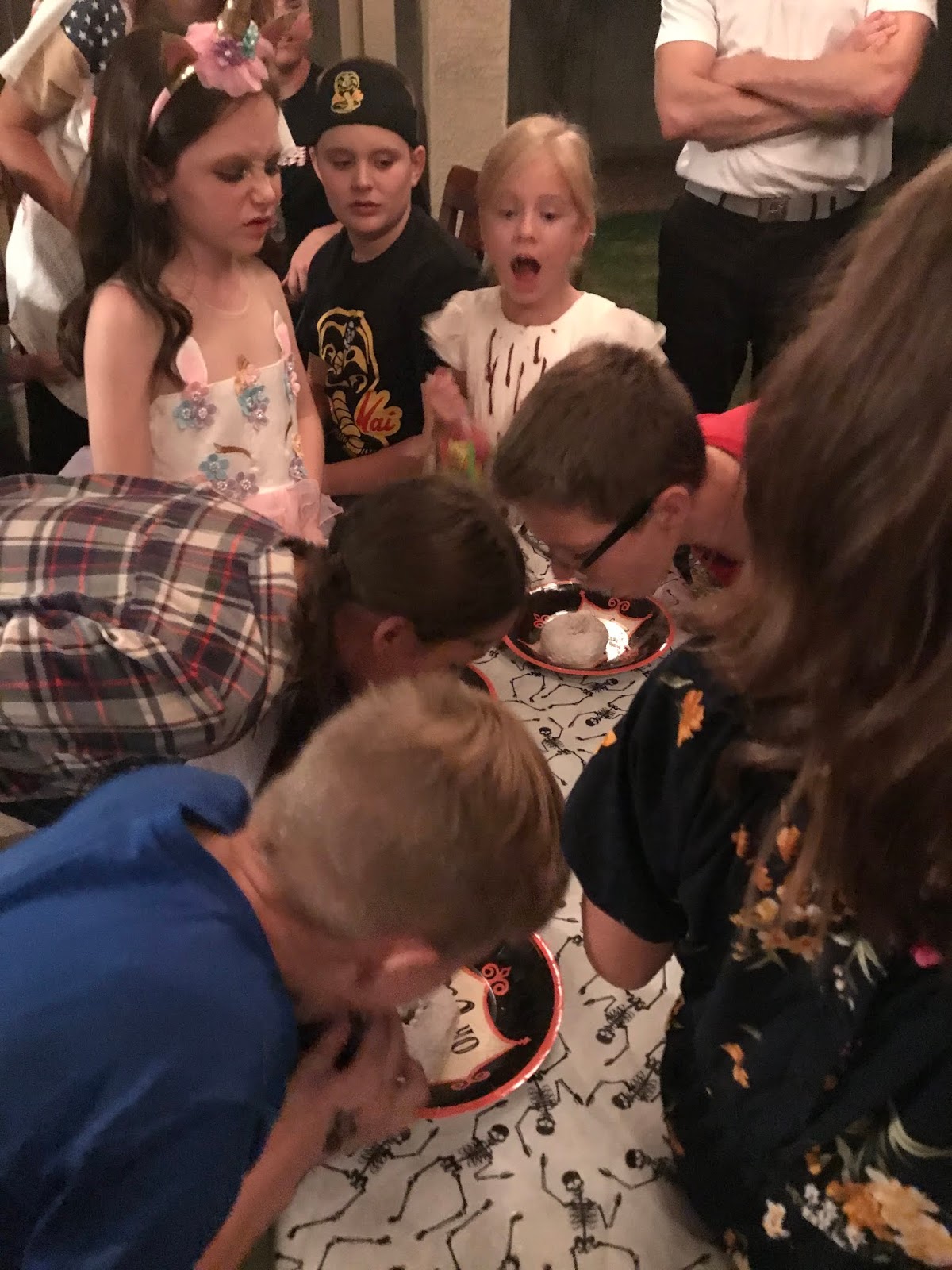 Player must place a set of vampire teeth into their mouths and then the first one to eat an entire powdered donut WITHOUT using their hands, wins 10 points for their team.

I purchased 2 plastic pumpkin buckets and placed at the bottom, 10 pennies.  I then covered them up with dirt, WORMS {yes, real! you can buy them at Wal-mart} and dog food.

The first person to pick out 5 pennies wins 10 points for their team.

ROUND 4:  BOBBING FOR TURDS
{Keepin it classy!} 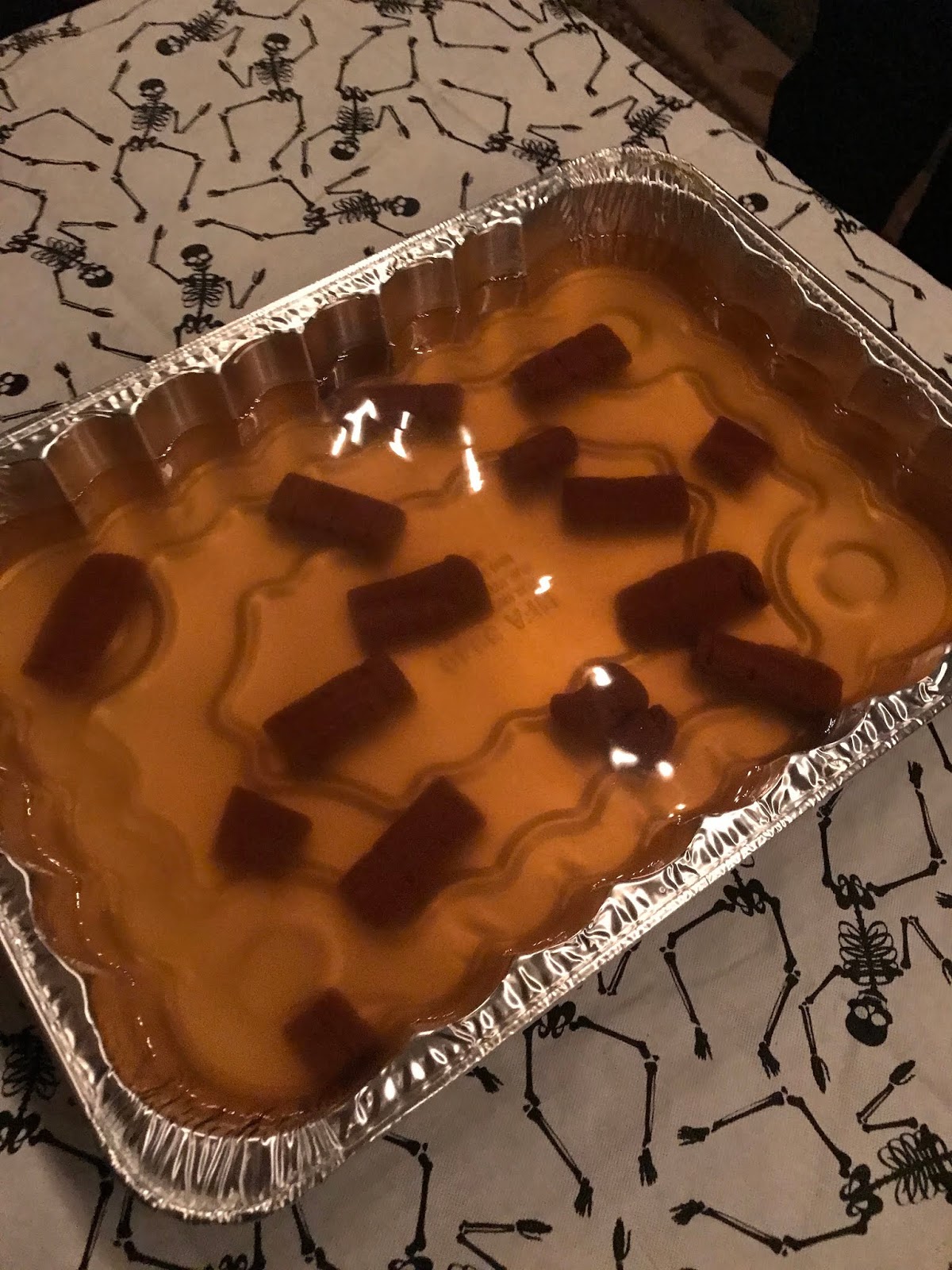 You are literally bobbing for TURDS {Tootsie rolls} mixed in URINE {apple juice}.  First person to pull out 10 turds wins 10 points for their team. 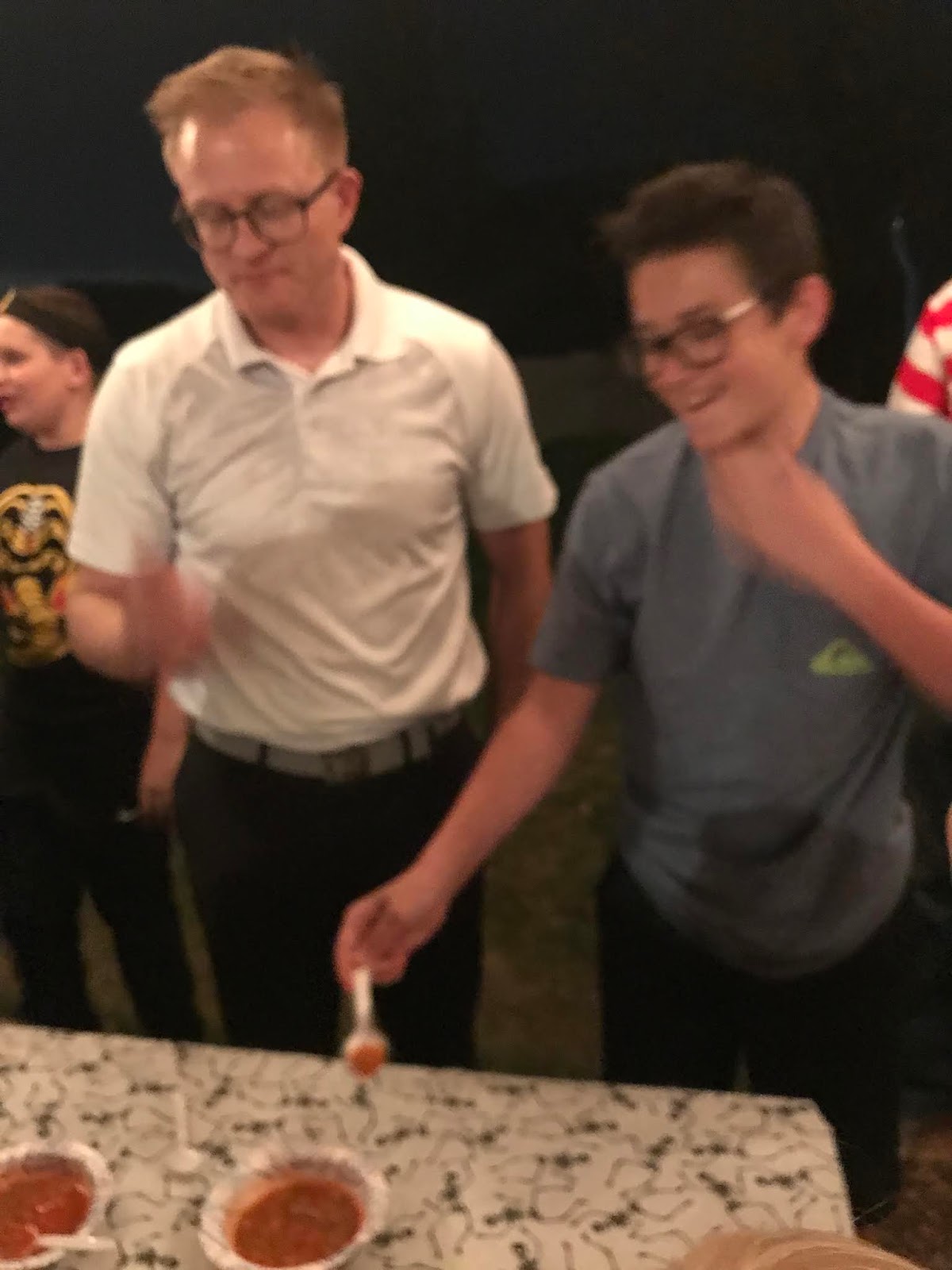 Each team player that accepts the challenge to eat a spoonful of the HAIR RAISING HOT SAUCE mixture adds 10 points to their team.

Any number of people can try it.

Note: I used the HOTTEST hot sauce I could find at the grocery store and mixed it with fiery hot green chiles.

Make sure to have lots of milk on hand for afterwards.

Grant’s mouth was on FIRE! 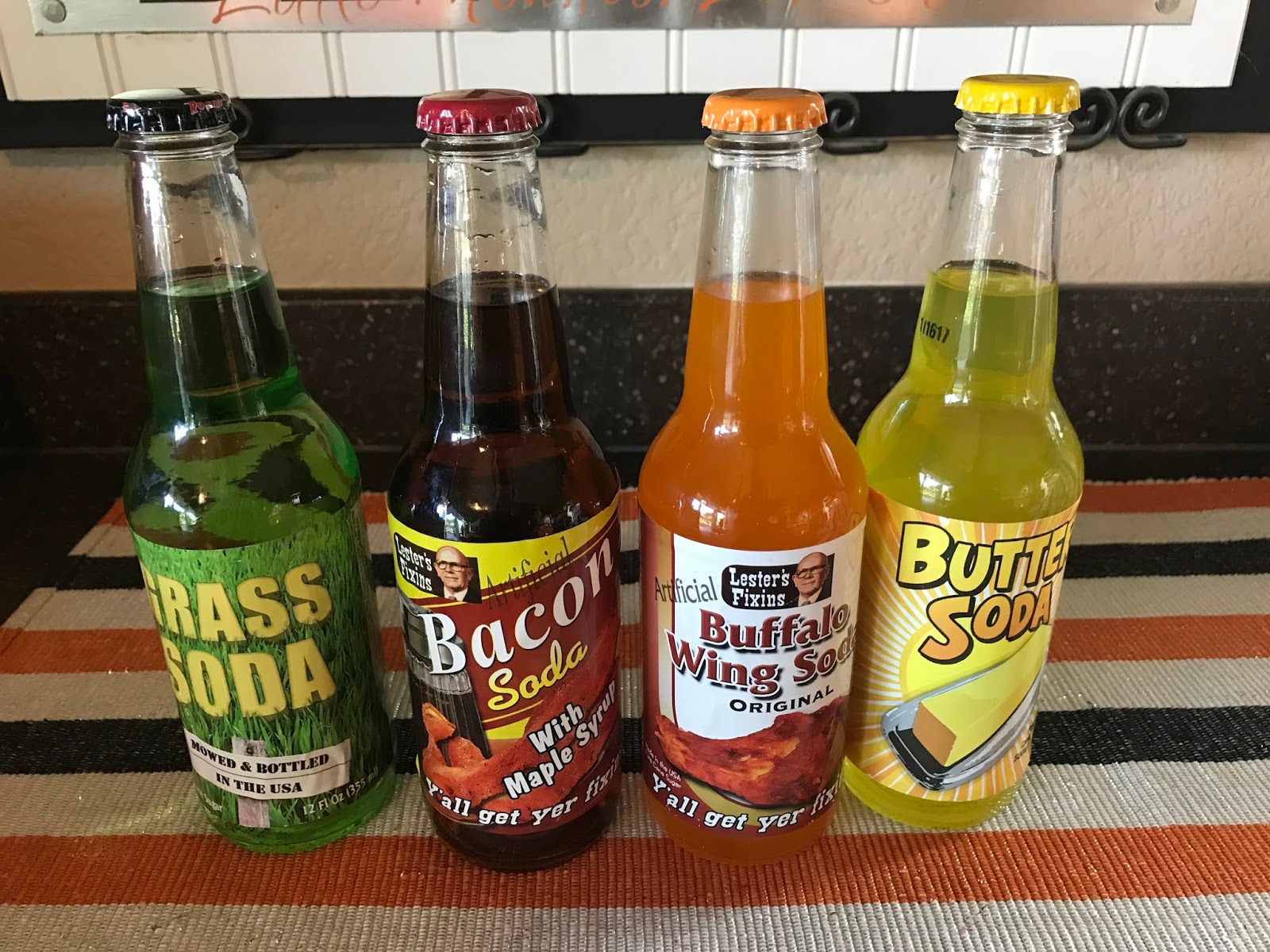 At our local candy store, you can purchase legit, gross sodas.  My kids LOVE it.  Not the sodas.  Just the fact that they’re gross and it’s funny.

I poured a little of each soda into 4 different cups. 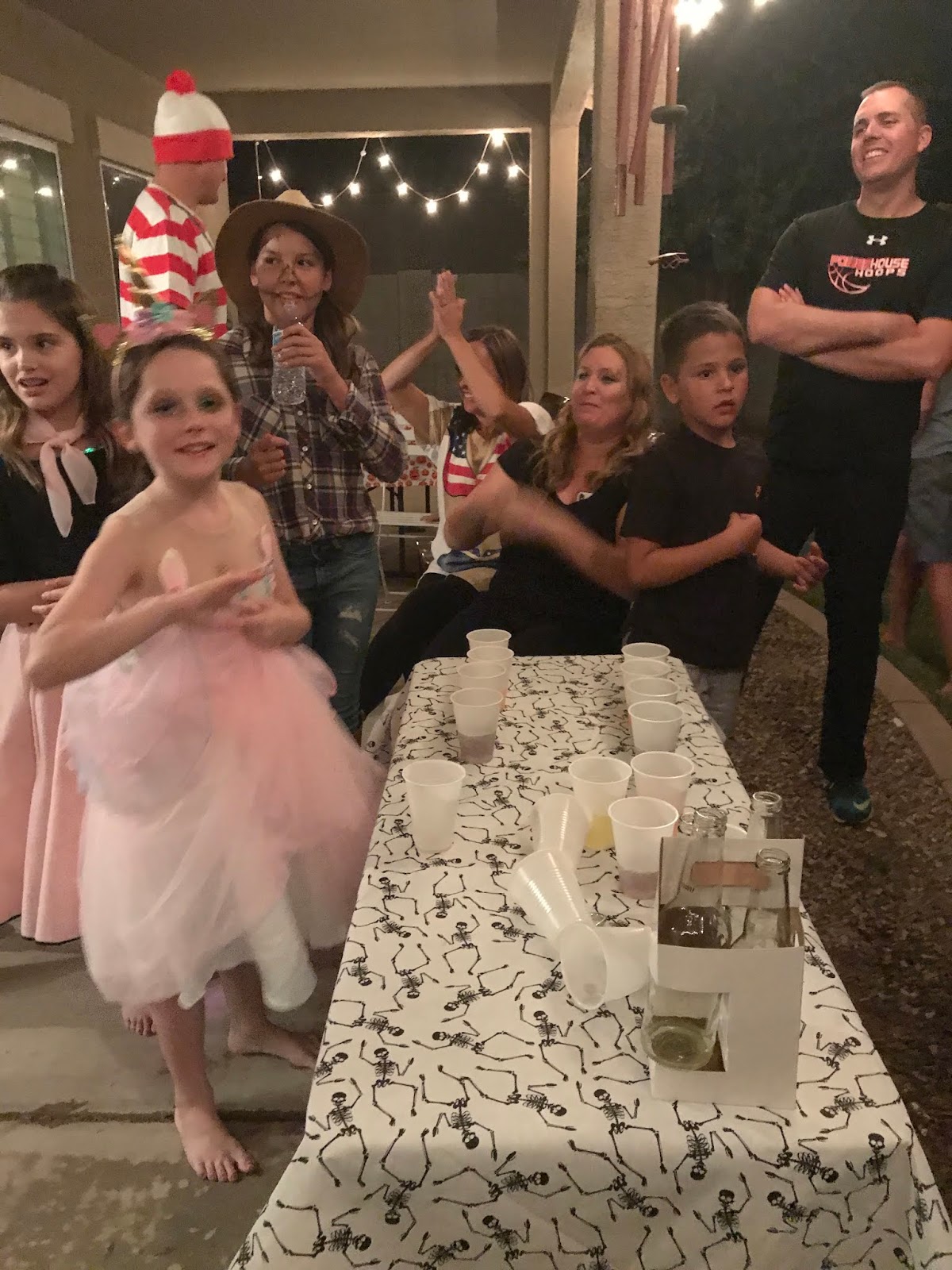 The first player on each team to chug ALL 4 cups {flavors} wins 10 points for their team! 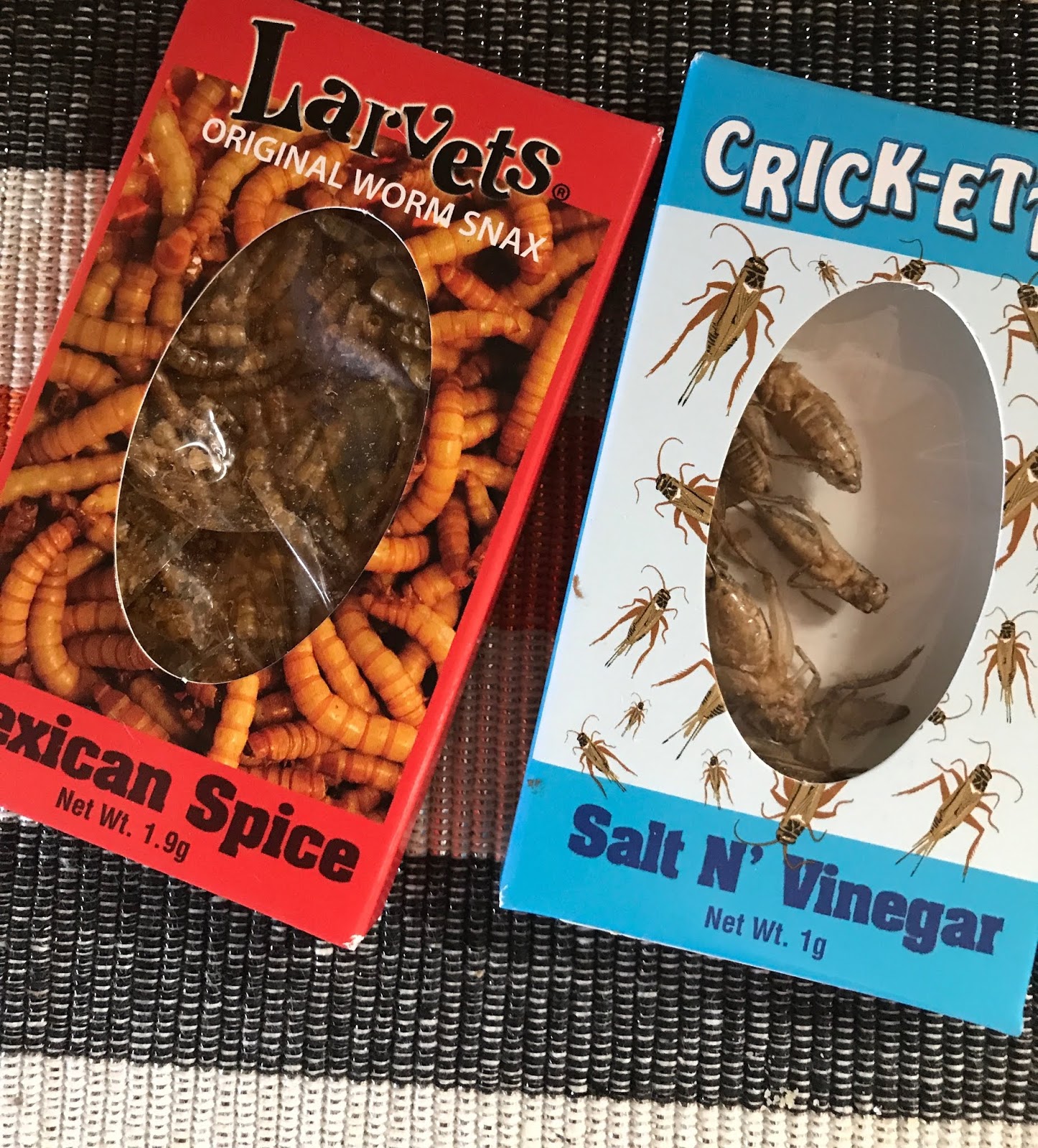 I put 1 cricket + a few meal worms each in a cup and filled up about 10 small cups.

Every person who ate a cupful of CREEPY CRAWLERS got 10 points for their team.

ROUND 8:  FINAL ROUND!!!!
At my local grocery store I bought a jar of pig’s feet.

Yup, they were as gross looking AND smelling as it sounds.

On the jar it said, ‘no cooking needed, ready to eat’…so I took that as a challenge!

I placed each ‘foot’ on a plate and the first person from all of the teams to eat 4 bites of a ‘foot’….won 20 points for their team!
My husband was the only champ to give it a try…
aren’t I lucky?!
😂😂😂

It was SO disgusting watching him swallow 4 whole bites but he DID IT!!!!

Winning team got a PRIZE!!!
And bragging rights, of course.

My kids LOVE playing this each year with their friends.
All year long I try to come up with NEW challenges….

You can’t go wrong with it – – make it your own and your guests will LOVE it!