The second part of our Halloween Party last weekend involved a gross/fun/gross game of Fear Factor.

Did I mention…it was gross?

I wouldn’t have had it any other way 😉

I came up with 6 different rounds and it was family verses family. Winning family won a gift card to Dairy Queen.

Here’s how it went down:
{At the end of this post there is a printable PDF version of all of these rules so that YOU can play this at your Halloween parties, too!} 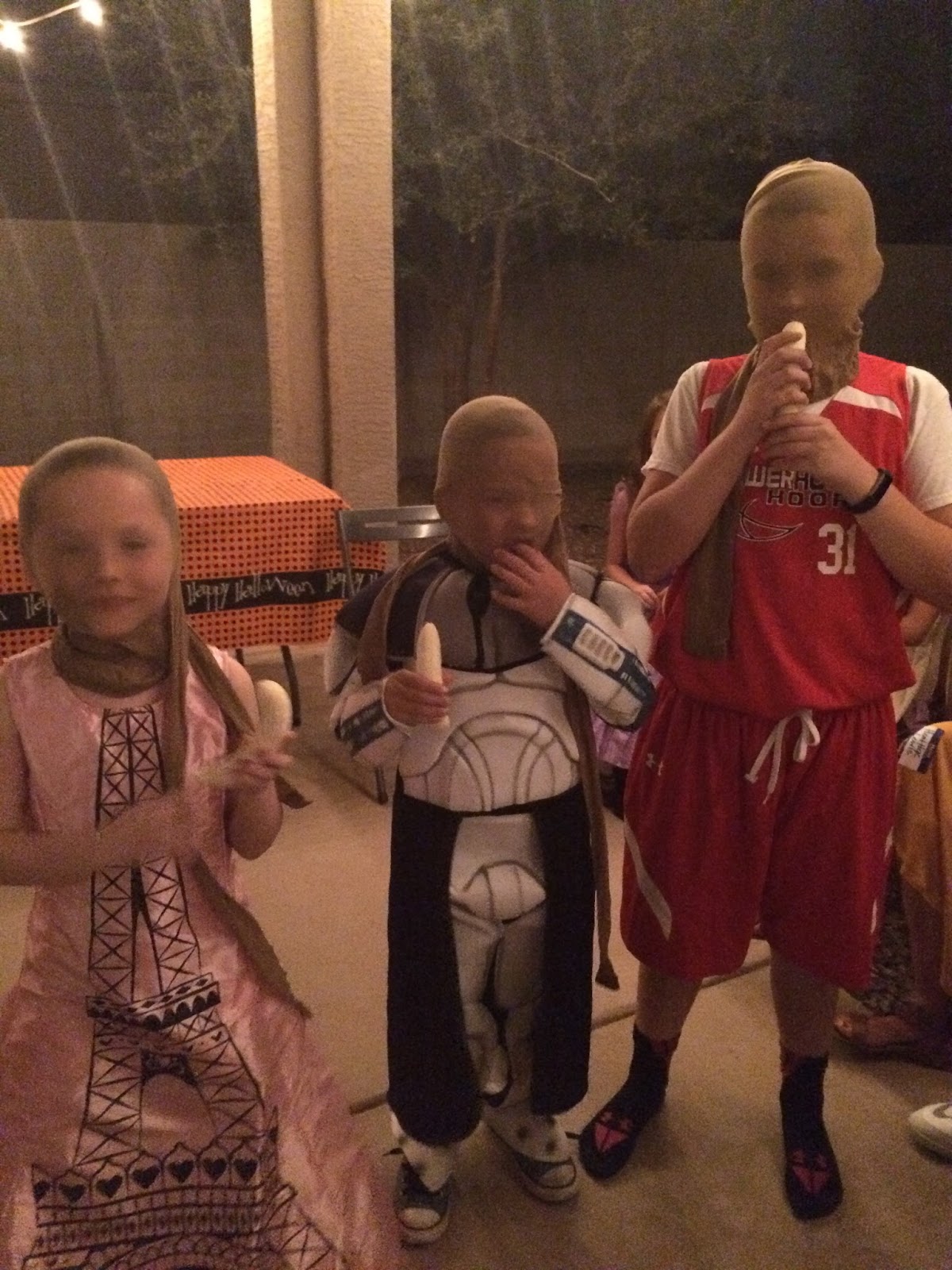 Pick one team member to place a pair of panty hose over their head. The first contestant to eat an ENTIRE banana THROUGH the panty hose WINS! Winning team gets 20 points.  And I don’t mean to brag but…..London totally rocked this round and won it for us. 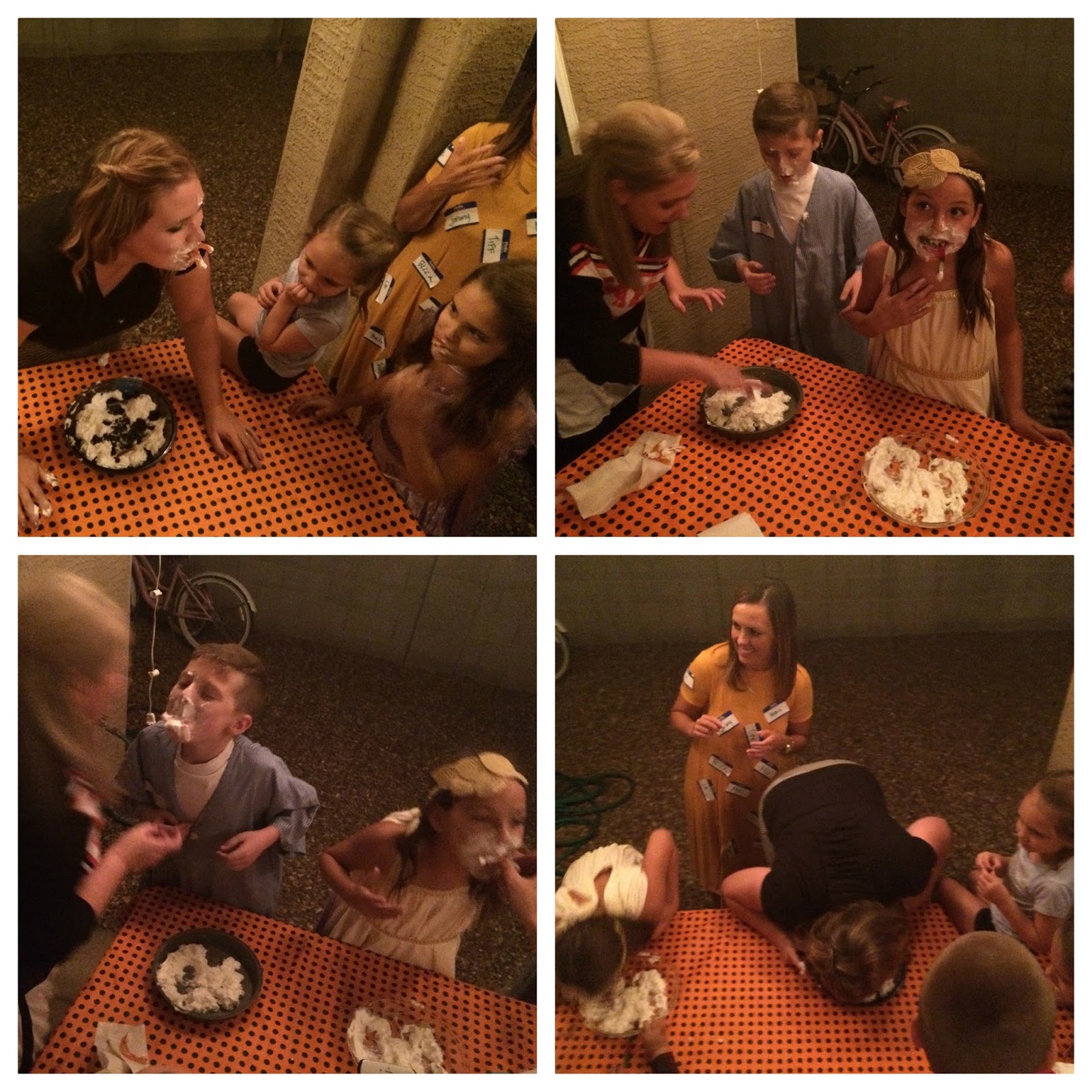 There’s a mama bird and a baby bird. The mama birds job is to dig into the whip cream pie, only using your mouth, and find a gummy worm.  Once you find the worm – pick it out with your teeth and place it in the mouth of the baby bird {your partner}. No hands allowed! The baby birtd must then eat AND swallow the worm. First team to finish all FIVE worms wins 20 points. 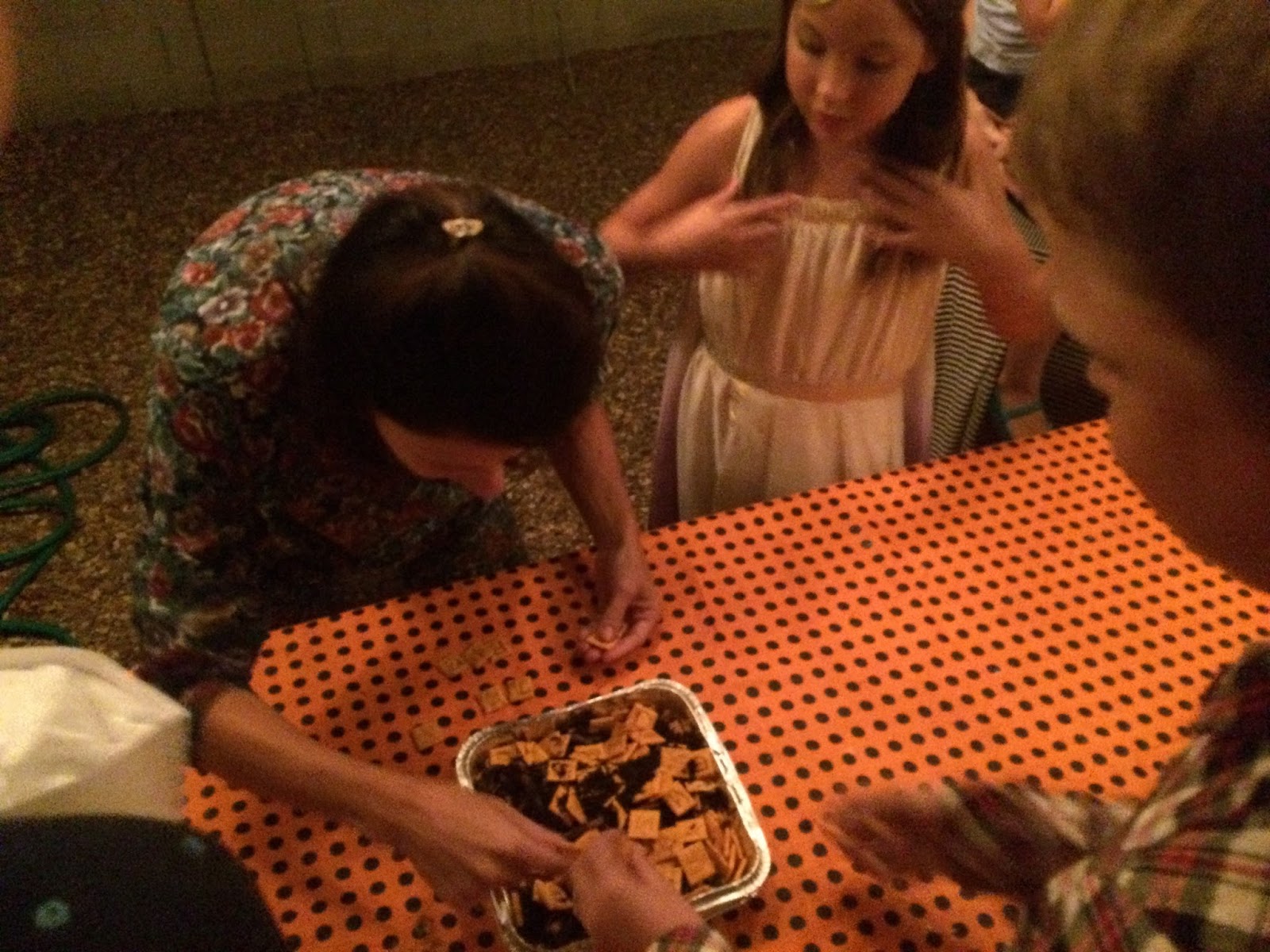 One person from each team must sift through the slugs and worms to spell out wordes with the alphabet crackers {Cheeze-Itz found at Wal-mart}. Words must be more than 2 letters long.  The team to spell the MOST words in 1 minutes wins 20 points.

Slugs/worms were purchased in the fishing department at Wal-mart.

Pick one person from each team.
In each bowl, per team, I placed some ‘mystery meat’ which included sardines {barf!} and chopped up Vienna sausages {Anyone else feed their kids those when they were little? Double barf}.

The person must grab a sardine or ‘mystery meat’ in their mouth {no hands!} and place it in the empty container next to them. They must transfer as many food items as possible within 1 minute. The person with the MOST items in their bowl wins their team 20 points.

Warning: the sardines smelled SO nasty that one of the dad’s doing this round barfed.  No joke. 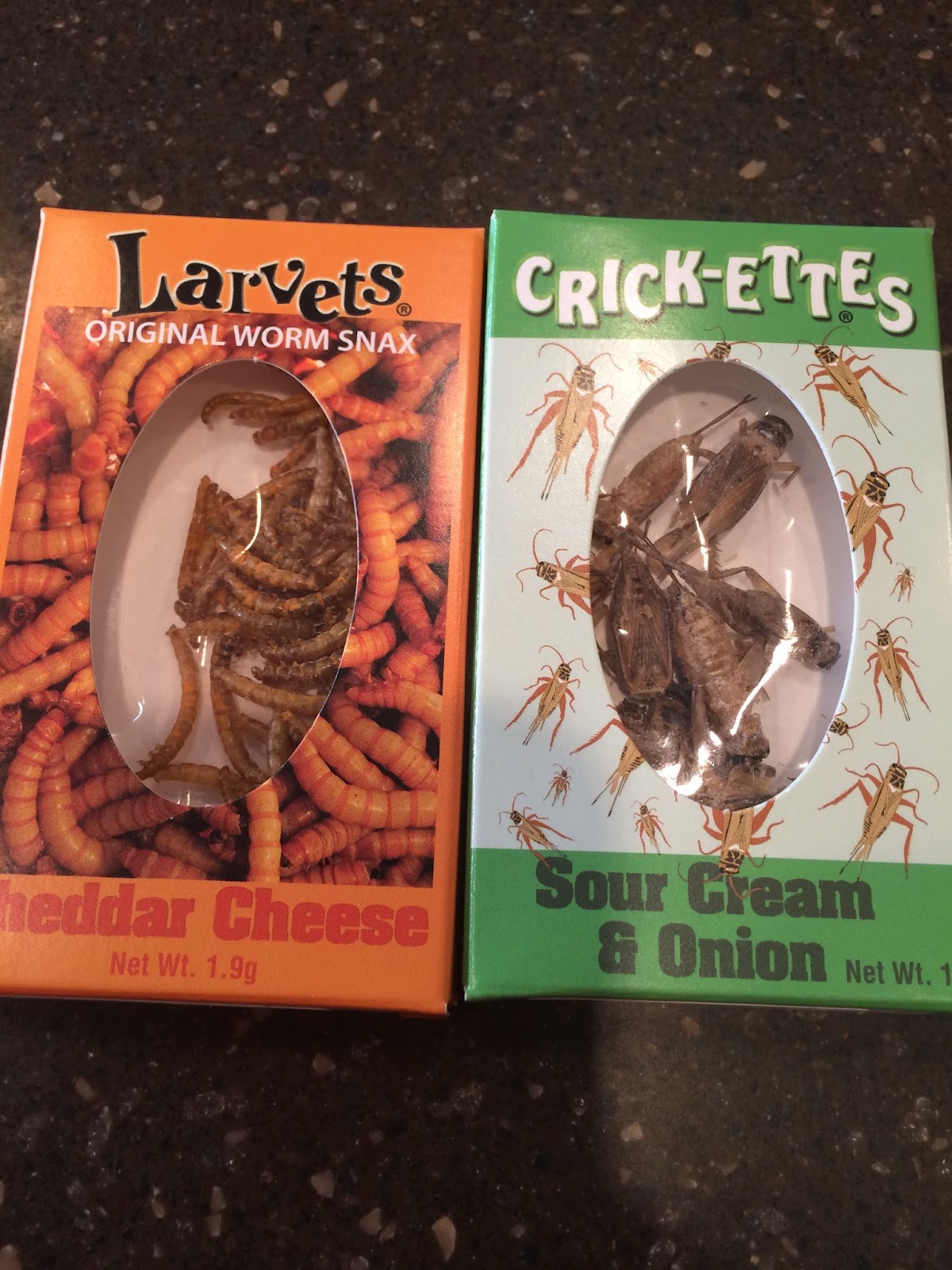 Can you even believe they sell these???
Found them at my local candy store  and wanted to vomit.
Which naturally meant…I just had to have them.

And EW! One of the dad’s ate ALL of the crickets.
At once. 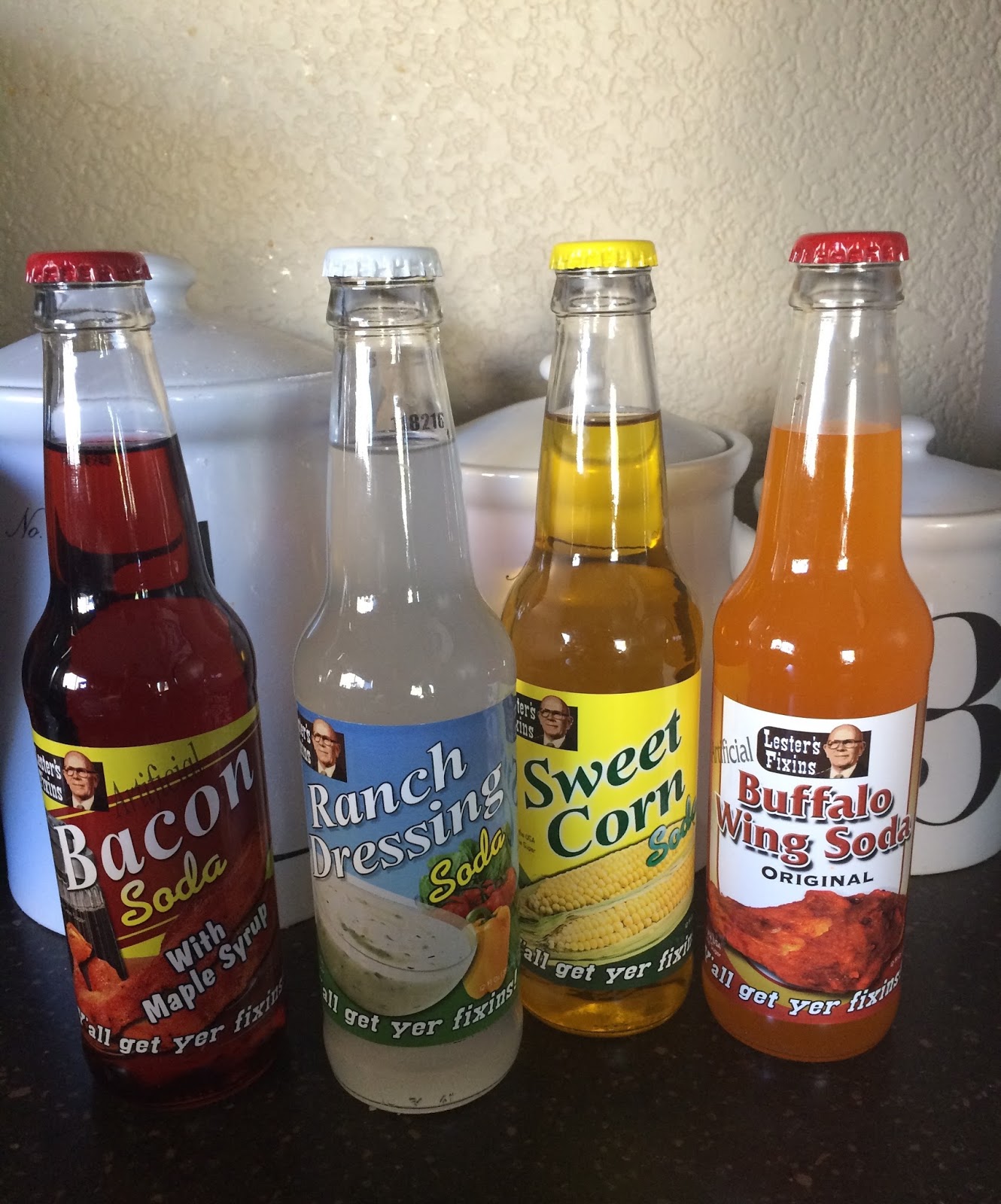 I lined up 4 shot glasses for each team with a different flavor in each glass.

The person to chug ALL 4 shot glasses won 20 points.
Side note: I did not tell them the flavors of these sodas beforehand.  It was a ….mystery. Mwahahaha!

You guys….this game was seriously fun!
And hilarious to watch AND participate in.

For a copy of my printable details/rules of Fear Factor
click HERE.